Please scroll down for the English version. 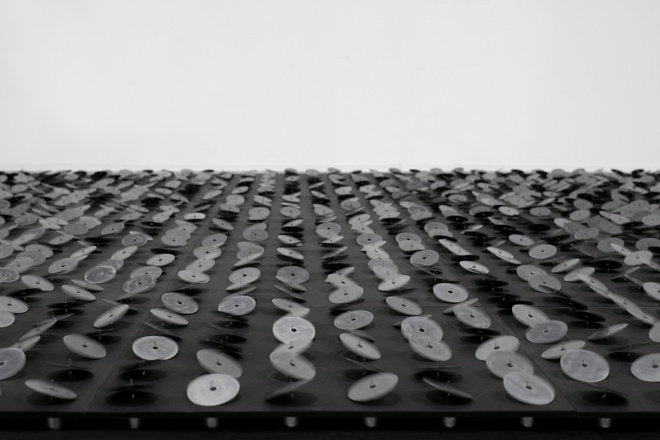 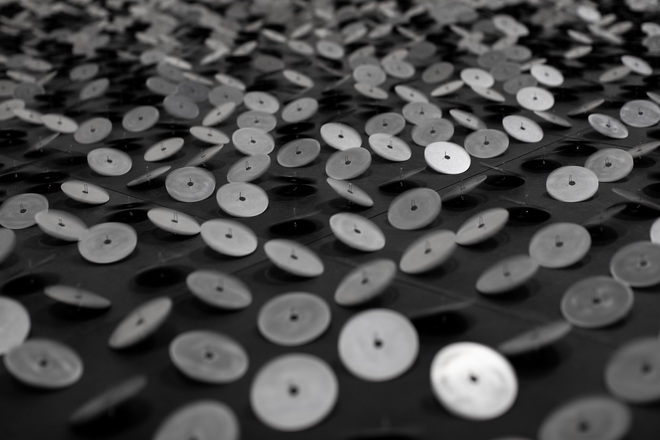 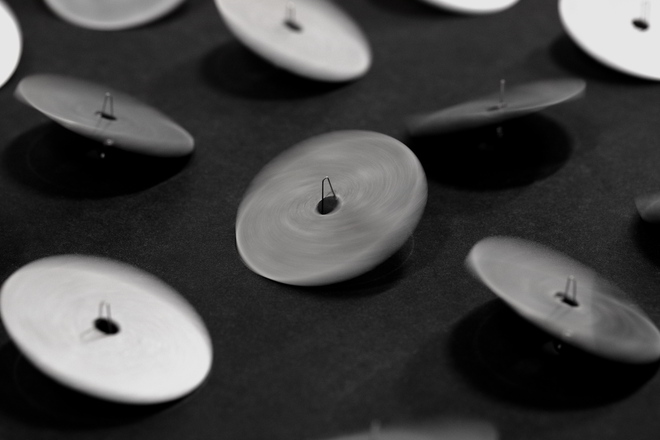 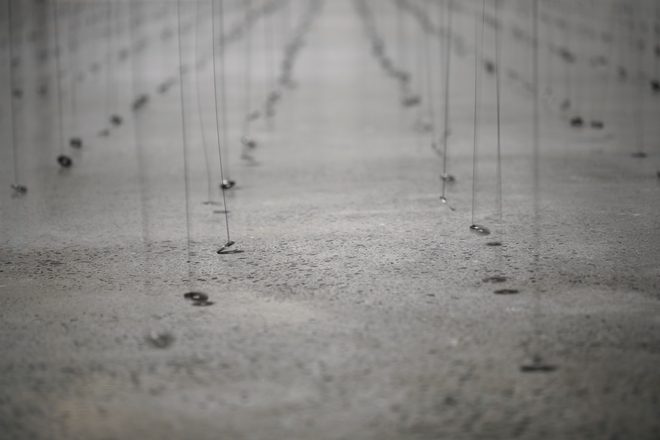 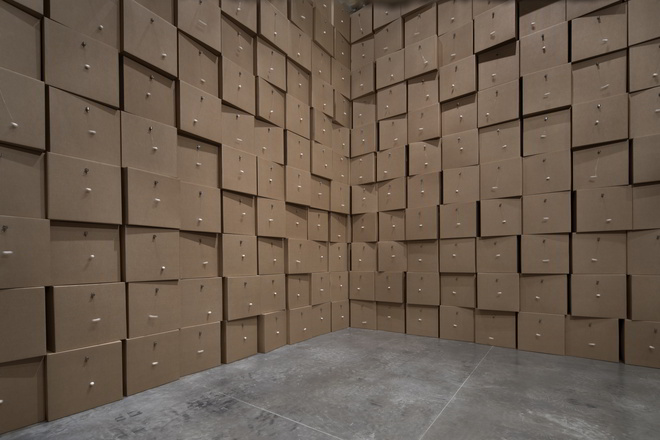 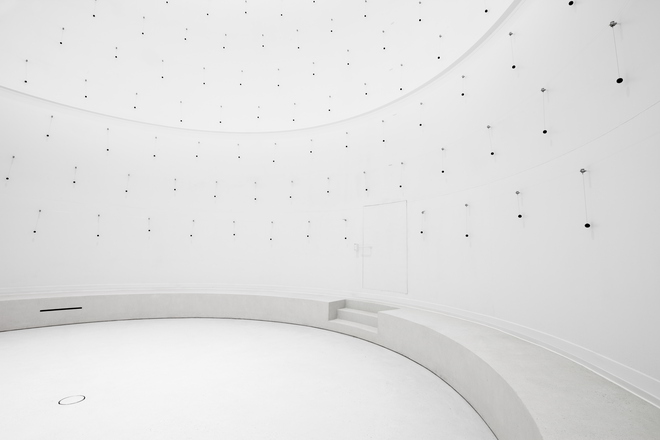 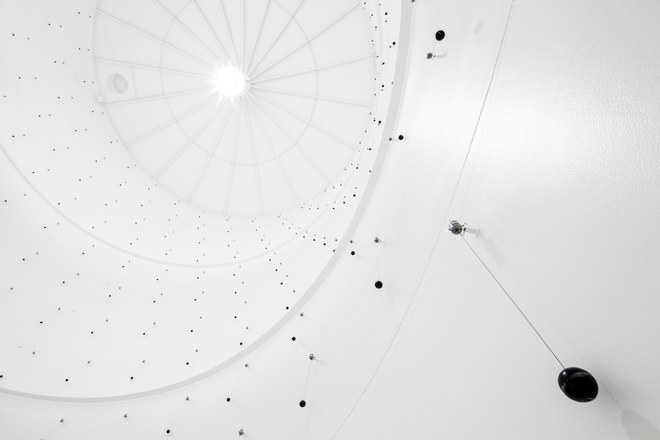 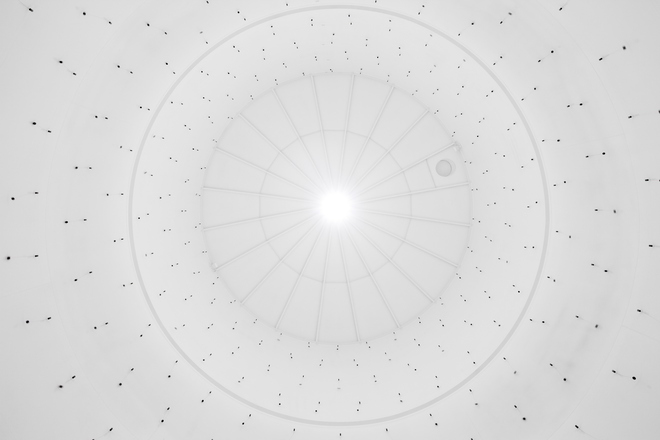 His utensils are humble objects such as round discs, balls, cardboard boxes and small motors; his passion is noise and sound. Each of Zimoun’s works is a single audiovisual experience and makes spaces and structures resonate.

Zimoun has an inquisitive ear – that cannot be overlooked. He has an eye for what can be acoustically elicited from objects in the everyday world and how they can be aesthetically prepared. He calls his works sound installations and sound sculptures. Mostly they resemble natural-coloured „monocultures“: Fields of wadded-up paper, metal round discs, wooden rods. Sometimes they come in teams, like cardboard boxes and balls. Wires and motors are his typical helpers. Each object composition moves along as if it has always been doing so. Their noisy aura lures from a distance, overwhelms up close. Zimoun’s world holds stations for the senses and places to pause.

The probability of experiencing one of these places à la Zimoun once in a lifetime is relatively high. Since 2004, he has been part of more than 100 group- and solo-exhibitions stretching from Europe to the USA and Asia. You can catch him soon (and once again) at Berlin’s Labor Sonor from 27 to 29 August. Another solo exhibition takes place at Zurich’s Haus Konstruktiv until 12 September. Some of his works are currently also in Seoul, Massachusetts, Apeldoorn, Bagnols-les-Bains, Ontario. And: exhibitions are planned in London and Davenport in Iowa until 2023. Such international presence and enormous productivity make one sit up and take notice.

Born in Bern in 1977, Zimoun has been exploring sounds, playing instruments and creating compositions since childhood. In addition, visual arts such as painting, cartoons and photography grabbed him. As a teenager, he came across the world of thought and the work of John Cage. The mix of fascination for hearing and seeing led to his profession: in the Bernese Studio Zimoun, he tinkers and fabricates with inconspicuous materials and technologies so that they produce something that is only distantly related to music and rhythm and cannot be dismissed with sound and noise alone.

What is it that Zimoun creates? In 2020, he showed one of his latest works of metal discs at the Geneva premises of the watchmaker Jaeger-LeCoultre: round thin discs reminiscent of holed coins (1944 in number), placed evenly and closely together on dark MFD plates, simultaneously set into continuous rotation. The kinetic ensemble initially suggests (in keeping with the watchmaker theme) images and sounds of a clockwork. But the thoughts can be taken even further. Because of the rotations, tilts and topples, the shiny surfaces of the metal discs begin to glitter, evoking ripples of water, bobbing waves. Two years earlier, Zimoun demonstrated these round discs in Korea. There, steel washers, attached to floor-to-ceiling wires, danced and jumped just above the floor of MoCA Busan. They are similar to dropped pennies or cents, which, with luck, do not remain inanimate but continue to fascinate for a while, like whirling dervishes and spinning tops. (The age of cashless payments will eradicate such small stunts).

What both disc projects have in common (and this applies to all of Zimoun’s works) is that we can watch and listen to them endlessly, while the observer and eavesdropper in us begins to rummage for comparisons from everyday life and nature. Likewise, examples from culture come to mind. This is the case with the „Korean hole coins“: Their rattling sounds are distantly reminiscent of the small metal plates under the shoes of foot acrobats, that is, Gene Kelly, Sammy Davis Junior and Fred Astair. The latter even did his tap dance – thanks to film tricks – on walls and ceilings. Stepping makes the floor audible, gets acoustics and rhythm out of it. This dance transforms stage and parquet into a musical instrument, a drum kit, an indispensable partner.

The move from floors and surfaces to space and architecture is not far with Zimoun. Cardboard boxes are an almost childlike choice for this; they can be stacked and cubed and – themselves an object with space – transformed into towers, tunnels or caves. In 2017, at the Paris cultural centre Cent Quatre, he set up the cardboard containers in such a way that a relief emerged. The result figuratively demonstrates the interface of architecture and music and sound: The slightly offset cardboard boxes resemble diffusers, building elements that disperse incoming sound waves. If the wall structure had more depth, it could compete with a soundproof chamber. Zimoun places one white cotton ball per box on the high walls designed in this way. It is attached by wire to a small DC motor. The apparatus is visible. We witness how the balls continuously swing and oscillate on the walls. This space amazes us with a knock massage and a throbbing concert.

In 2013, Zimoun had the opportunity to try his hand at a building: a former industrial silo for methylbenzene (toluene tank). The actors here are also cotton balls, but in black. This sets them apart from the dazzling white walls of the cylindrically shaped interior. Like drops, they litter the wall surface at loose intervals up to the dome ceiling, drumming ceaselessly on the construction. Zimoun fills the empty tank with sound. He completes it, reinvents it. The round building is as if adorned with a restless black hanging, a decorative dynamic; it wraps itself in a sound dress. In winter, there is a dialogue with the season and the outside world: noisy black balls inside / silent white snowflakes outside – a kind of natural yin-yang situation that Zimoun has captured on film. The endless swirl of sounds in the midst of architecture seems like the negative of an infinite starry sky. Doesn’t it sound like the vibrating glow of stars in the firmament? Your gaze keeps going up to the roof and you might think it’s raining sound into the room. Zimoun’s works let the fantasy flit. They have synaesthetic potential.

For all its multi-layered suggestiveness: typical of Zimoun’s work is its simplicity. He uses industrial products such as cardboard boxes, plastic and paper bags, roof battens, foils, packaging chips and fans. His mechanical elements include DC motors, wires, microphones and loudspeakers. All together, he puts them into an orderly system that cannot be shaken even by the most startling movements. Each work is reduced to one material or one material duo and usually consists of masses of uniform objects that work together like an orchestra.

Nevertheless, the artist fails the minimalist check. Zimoun uses purist means and materials to focus on perception itself and thus very much fulfils a criterion of minimalism. And yet: the associative, symbolic, intellectual added value – which is taboo in Minimal Art – is, as we see, not completely avoidable with him.

Similarly, it is unavoidable that when confronted with his works, comparisons with other artists impose themselves. For example, Peter Fischli and David Weiss with The Way Things Go from 1987. But in Zimoun’s work, the engines work modestly, albeit undisguised, in the background; he does not build slapstick machinery or physical experiments. And what about Rebecca Horn’s The Turtle Sighing Tree from 1994? The copper pipes, copper funnels and sound equipment could come close to Zimoun’s means. And yet, firstly, he refrains from poetic titles (Zimoun does not breathe in essence by name) and secondly, Rebecca Horn’s pandiculating branches and funnels need the active participation of the audience; one has to approach and listen to the sighs. The „stirrings“ in Zimoun’s works, however, are not aimed at „emotions“ – not in the psychological sense. How about Jean Tinguely: would he be a suitable candidate for kinship? After all, he called himself an artist of the movement. But his wheelwork jungles were bursting with diverse shapes and colours. Finally, looking at Zimoun’s age group, Sarah Oppenheimer springs to mind; many of her space-communicating sculptures, preferably made of black-coloured steel and glass, rotate. But: Oppenheimer’s rotations are gentle and flourish in silence.

Speaking of class: the Bernese artist is hardly interested in being put in a category. But one overarching question should finally be allowed: Is Zimoun an aesthetician? In the strictest sense: yes, because the word aesthetics contains the doctrine of sensual, physical perception and sensation, what the ancient Greeks called aisthesis. Zimoun is concerned with acoustic phenomena, how they are experienced and enjoyed in interaction with objects, surfaces and spaces, how they are heard with the ears and how accoustic noise makes the body vibrate. But despite all the obessions about sounds: the eyes do not have to be closed. „What you hear is what you see „1, Zimoun calls it. And indeed: the jingling of metal plates only becomes attractive with the twisting and fidgeting and bouncing, and the crackling of paper bags only becomes really exciting with the blowing and bulging and surging. You should dare to do it more often: listen with your eyes wide open.

CHYBIK+KRISTOF: House of Wine in Znojmo